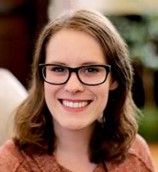 Chloe Hamer is a PhD student in the Department of English and Comparative Literature at UNC Chapel Hill. Her research centers around questions of collective memory, class, and political resistance in postcolonial Caribbean literatures, with a specific focus on the relationship between anti-global capitalist activism and literary form. Chloe’s dissertation aims to explore depictions of labor in contemporary Haitian and Haitian diasporic novels, examining the ways in which these novels make use of opaque narrative techniques to critique networks of neocolonial commodity production and consumption. Chloe has taught courses in the French and English departments at UNC; she has also been the recipient of a Foreign Language and Area Studies fellowship for the study of Haitian Kreyòl.

Click here to check out Chloe’s Writing in the Social Sciences Unit Assignment, on writing a policy brief for Student Action with Farmworkers (SAF). 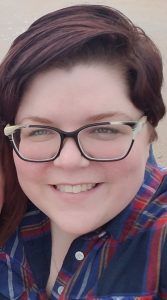 Lindsay Ragle-Miller is currently a first-year PhD student at the University of North-Carolina at Chapel Hill, who teaches ENGL 105, the introductory composition course. In research, Lindsay is interested in Medieval Studies, particularly through the lenses of Disability Studies and Queer Studies. She earned a BA in English with Teacher’s Certification from Eastern Illinois University in 2009. Even then, Lindsay was interested in Medieval Studies, as one of the first students to earn an interdisciplinary minor in Medieval Studies. She taught high school English and Special Education for six years before returning to college to work on an MA. During Lindsay’s MA at Wayne State University, she continued the study of medieval literature, working closely with the resident medievalist Hilary Fox. Her master’s thesis, “’I Can So Just Sit Here and Cry’: Depression, Melancholy, and Acedia in John Gower’s Confessio Amantis,” explored the connections between mental disability and medical treatment in Confessio Amantis. Lindsay also presented at several conferences, the details of which are available on her CV page. While at Wayne State, she took several classes in early modern literature, focusing on Queer Theory, with Dr. Simone Chess. During two semesters, the class worked together to create “The Woman Warrior Project” website, a digital collection of Diane Dugaw’s thesis that collected and cataloged ballads about Women Warriors in the early modern period.

Click here to check out Lindsay’s Writing in the Social Sciences Unit Assignment, or here to view a list of texts associated with the Unit, on pre-Columbian and contemporary Latin American literature and culture. 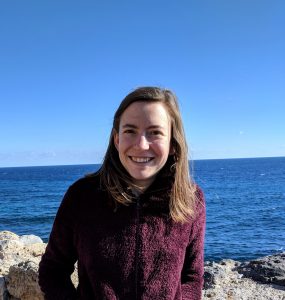 Eleanor Rambo is a PhD student in the Department of English and Comparative Literature at UNC-Chapel Hill, where she specializes in 20th and 21st-century American and Russian-language literature. Her work explores how literature functions as a marker of identity, as well as cultural and economic systems’ influence on the novel. Her writing has appeared in the publications World Literature Today and The Common, and she is currently the Managing Editor of The Carolina Quarterly.

Click here to check out Ellie’s Writing in the Natural Sciences Unit Assignment on Science Reporting with a Latina/o Studies Focus. 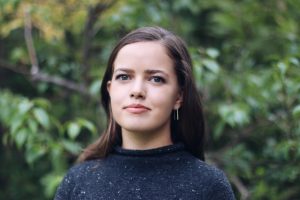 Carly Schnitzler is a PhD candidate and teaching fellow in the Department of English and Comparative Literature at the University of North Carolina at Chapel Hill. Currently writing a dissertation on the rhetorics and poetics of automation, her research and writing focuses more broadly on the intersections of rhetoric, experimental poetics, labor practices, and digital infrastructures. Her scholarly work has been published or is forthcoming in electronic book review, Textshop Experiments, The CEA Critic, and The Geography Teacher, among other publications.

Click here to check out Carly’s ENGL 105i Writing in the Digital Humanities Unit Assignment, on Dominican-American writers and narrative choice. Jo Klevdal is a PhD student in the Department of English and Comparative Literatures where she studies 20th century literature. Her primary interests relate to various understandings of memory and their relationship to both language and image. For her current work, she examines the intersection of photography and literature in the early 20th century. Jo is originally from Colorado and holds a M.A. from the University of Colorado, Boulder. emilio Jesús Taiveaho Peláez is a first-generation migrant and a PhD. student—in that order—through the Department of English & Comparative Literature at the University of North Carolina- Chapel Hill. As both poet and scholar, their work engages the intersection of aesthetic experience and political discipline, blending critical, creative, and archival inquiry. Focusing on 20th-century experimental poetry, their dissertation (tentatively titled Ojos de Hierba: Walt Whitman’s Children & the American Lyric) probes a shared subterranean literary and philosophical history in the Américas through the lens of Neobaroque aesthetics, tracing dissonant and dissident relations in the life and work of figures such as Federico García Lorca, Langston Hughes, Allen Ginsberg, Néstor Perlongher, and Cecilia Vicuña. emilio’s first book of poetry, landskips (words are a hard look), a latinX reconnaissance of the sonics and optics of our contemporary USAmerican physical and imaginative landscapes, is forthcoming through The Concern Newsstand.

Click here to check out emilio’s Writing in the Social Sciences Unit Assignment, focused on songs affiliated with social movements. Nikki Roulo is a Ph.D. Candidate in the Department of English and Comparative Literature at the University of North Carolina at Chapel Hill. Her research focuses primarily upon early modern literature and in particular, the intersections of poetics and performance, the fool figure, ballads and politics. Leslie Rowen is a third year PhD student in the Department of English and Comparative Literature. There, she focuses on 20th Century American Literature of War, especially soldier writings composed during wartime. In 2017, she received her B.A. in English and Spanish from Bellarmine University in Louisville, KY. During her time at Bellarmine, she studied for a semester at the Universidad San Francisco de Quito in Quito, Ecuador, where she took classes in Spanish and Ecuador’s history. Between her time at USFQ and Bellarmine, she also took several classes on Latin film, which will be the focus of her English 105 Humanities Unit. Some of her favorites are Pablo Larraín’s No and Tania Hermida’s Qué Tan Lejos. She is eager to share these films with her students, hear their perspectives, and help them create dynamic visual essays using Adobe Spark.

Click here to check out Leslie’s Writing in the Humanities Unit Assignment, focused on Latinx Film. My primary interests reside at the intersection of environmental humanities and contemporary LatinX literature. Topics which I find exciting relate to the rhetoric of environmental advocacy, the myriad of emotional responses to the threat of climate change, and the ways in which LatinX writers and artists create environmental epistemologies through their works. Outside of the academy, I enjoy nurturing all forms of human and other life; I am an avid houseplant collector, a stepmother to three girls, and have three dogs whom I love very much.